Jim Corbett National Park is the oldest national park in India. It was established in 1936 as Hailey National Park in the Nainital District of Uttarakhand.

Dhikala is one of the most popular sought after tourist accommodation in Corbett Tiger Reserve. Herd of elephants and spotted Deer pack the vast expanse of famous Dhikala Chaur. This is probably the best place in the Tiger Reserve to spot very rare Hog Deer.

Elephant safari is the best way to view wildlife and jungle through the grassland (Chaurs) and thick jungle by an unconventional route. It is the best way for searching for tiger or a herd of wild elephants.

Corbett Jeep Safari is an ideal way to explore the wildlife & takes you to the tough terrain of the forest. Visitors can book online Jeep Safari for SEVEN different zones of the park namely Sonanadi, Bijrani, Jhirna, Dhela, Durgadevi, Dhikala & Garjiya Tourism Zone. All the procedures of Safari Booking at Corbett are managed by the forest...
Read More

Canter safari is a common safari in that 16 people can accommodate in a time, it is a shared safari, Canter is like a mini Bus or you can say a mini RTV bus. Canter safari goes to Dhikala zone which is the middle part of Corbett Tiger Reserve or Corbett National Park and well known for its density and beauty...
Read More

Dhikala is one of the most popular sought after tourist accommodation in Corbett Tiger Reserve. Herd of elephants and spotted deers pack the vast expanse of famous Dhikala Chaur. This is probably the best place in the Tiger Reserve to spot very rare Hog Deer...
Read More Corbett Tiger Reserve is an ideal home for many majestic animals like the Royal Bengal Tiger, Asiatic Elephant, Reptiles, Birds and many other wild animals. Corbett Tiger Reserve has captured the imagination of many with its diverse wildlife and breathtaking landscapes. The natural uniqueness of the area was recognized long ago as a result of which in 1936 Corbett attained the distinction of becoming the first National Park to be established in mainland Asia. The park was then named as the 'Hailey National Park' and was later renamed as 'Corbett National Park' after James Edward Corbett the noted hunter turned conservationist of the area. The area came under 'Project Tiger' in 1971 when Gov. of India launched this ambitious conservation project.
Today after addition of areas into the originally declared National Park, the total area of Tiger Reserve extends 1288.31 sq. kms spreading over three districts of Uttarakhand viz., Pauri, Nainital and Almora. Corbett National Park covers an area of 521 sq. km. 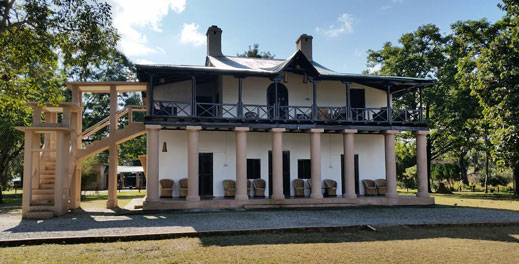 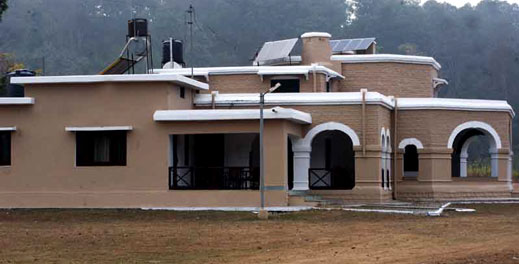 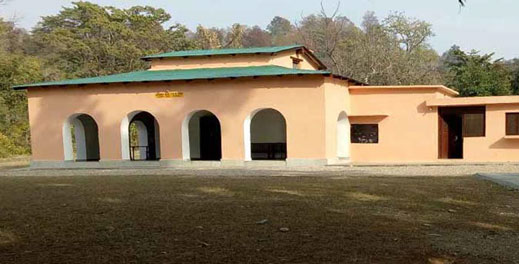 Jim Corbett National Park known for tiger safari is among the few national parks of India that permits night stay inside the buffer zone of the park. The forest rest houses are built right inside the core area of the Tiger Reserve, assuring the more real experience of the wild. These rest houses are more than a century old which offers a very interesting place to find accommodation in. A fine balance is created among tiger safari zones and forest rest houses of the park for better tourism management without disturbing the natural habitat of the wildlife species. Here is the list of forest rest houses of the Jim Corbett national Park located in different tourism zones.

Dhikala is one of the most popular sought after tourist accommodation in Corbett Tiger Reserve. Herd of elephants and spotted deers pack the vast expanse of famous Dhikala Chaur. This is probably the best place in the Tiger Reserve to spot very rare Hog Deer. Read More

Birjani Tourist Zone is a very popular area of the spectacular Corbett Tiger Reserve. This zone is enriched with a huge number of floral and faunal species. Birjani gives a tough competition to Dhikala zone while the tourist's preferences are concerned... Read More

Jhirna is located on the southern periphery of Corbett Tiger Reserve. The animal population also comprises sloth bear and wild elephants which provide great sights for the wild life enthusiasts. Jhirna zone is open throughout the year. The Jhirna jeep safari zone is one of the most eye-catching spots inside the Corbett Tiger Reserve... Read More

Corbett Tourism like to inform you that Jim Corbett National Park offers you a Tourism Zone by name of Teda Gate, Pawalgarh Tourism Zone. This is newly opened zone in Corbett for Visitors in that visitors can spent there 4 hours in the jungle during Gypsy safari. Corbett Landscape is loaded with nature`s wonders, and borders the main attraction of the park... Read More

Things to Do in Jim corbett Corbett National Park was the first Tiger Reserve under the project in India. So from that point of view Corbett is one of the oldest as well as the largest national park of India...
Read More The Corbett National Park is blessed with the natural bounty in the form of distinct flora which comprises of fresh water flora and alpine flora. Extent over an area of more than 521 sq. km... Read More Water is essential for the survival of the spectacular avifaunal diversity present in the Corbett National Park. Such a remarkable gamut of flora and fauna species in the park is seen ....
Read More 4x4 Open Jeep Safari Tour is the best way to observe wildlife in the thick & lush green forest of Corbett Tiger Reserve. 4x4 Open Jeeps with groups of tourists, individuals accompanied by an experienced naturalist are allowed into the park..
Read More How to Reach Corbett Tiger Reserve : Corbett National Park is easily accessabile from the capital of India 'Delhi' by road and also by train. Nearest Airport is also 'Delhi Airport' which is around 250 kms away from 'Ramnagar'...
Read More Corbett National Park has been a haunt for tourists and wildlife lovers for a long time. Tourism is allowed in selected areas of Corbett Tiger Reserve so that people get an opportunity to see its splendid landscape...
Read More